The most exciting thing that happened this week was on the 8th Oct I felt and saw the baby move from the OUTSIDE of my belly for the first time! Since then it’s gotten stronger and more frequent. At first the movement was very slight, and only one time that day, but now it’s very regular and a larger area of the stomach will move for longer.

Yesterday it felt like the baby was kicking down on my cervix or something. This happened twice yesterday, for about 1o mins each time. The second time my husband shone a bright torch at the stomach and it stopped for a while. It was so painful I thought it may have been Braxton Hicks or something.

We still haven’t had success picking up the baby’s heart beat with our own fetal doppler.

Heartburn is still a frequent problem. I’m still on the Quick-Eze. We tried the peppermint version and that was ok too.

I’m more tired now than I was last trimester, and I haven’t been for many walks at all, and breathing is harder.

I don’t think I’ve been getting enough water, as my urine is dark most of the time, and I get dizzy spells occasionally.

I’ve been getting a lot of pins and needles in my hands and feet this week – probably from sitting for too long. When I do try to stretch or stand, I get uncomfortable pretty fast, and my body clicks and cracks.

I’ve also noticed that my hands and feet are quite dry lately. Last night I put heel balm on. My heels feel a lot smoother now.

I really want to go swimming, now that the weather is heating up. I feel hot and sticky all the time, making me irritable and short-tempered. Sweat typically runs down the back of my legs in the car now – even on short trips.

My core body temperature seems to change frequently now. I can be boiling, and then 10 mins later I’ll complain it’s too cold – even the weather looks glorious outside. I really notice now If I skip showers, as I sweat easier.

I’ve been making a real effort to brush my teeth morning and night now, as I’d like to keep my teeth as healthy as possible. I’ve been pretty slack with that lately.

We had an antenatal appointment on Thursday, and we heard the baby’s heart beat again – it’s at 140. It sounded very regular, and was heard to the left of my lower abdomen. My blood pressure is normal.

They booked me in for another glucose test for next week. Apparently I was meant to have one 2 weeks ago but I totally forgot about it.

The hospital only does tours on Tues and Thurs nights when I’m teaching, so I just decided to move students around and go in Early December. I’m glad that the doctor said I’ll have my own room for the birth! That’s a huge relief, as I thought I’d have to be privately covered for that.

I’m a lot hungrier now than I was – but I’m trying hard to resist temptation.

My two biggest cravings lately have been red slushies, and crunchy nut corn flakes with strawberries, banana, and grapes.

I’ve also been loving pizza, burgers, hot chips, vietnamese rolls – (chicken more than pork now,) orange juice, and diet coke – but we try not to go overboard with takeaway and processed foods – maybe 1-2 a week. I know it’s still bad, and on Thursday I was told I need to start exercising more and eat better, especially now that the baby is putting on fat stores, and I need to prepare my body for labour.

This week I’ve been focusing heavily on teaching. We’ve had over $2000 come into our account for the term for teaching, so we just got more ahead with the bills. We have most things we need now, so we haven’t bought much for bubs, especially as my husband is saving for a camera and wants me to give him $800 for one. My husband is looking into getting Ambulance cover this week, and the brake lights on the car are faulty, so that’ll need to get fixed too.

This week we’ve bought a car mat for $25, for when he’s much older.

We also got some bookends from the reject shop, as we’re planning on giving him a shelf or two in the bookshelf. The design is firetrucks, though they had car ones too that I’d like to get. (These were $12.)

The most exciting thing we got was letters for his bedroom door and wall. We spent Wednesday this week painting and decorating them with 2 different colours of blue. One set was done with Felt, and the other was done in paint.  EXPERIENCE

I also rang up and finally booked some antenatal classes for November. Theres 4 classes in total on Thursdays, going for 2 hours each. Topics will include breastfeeding, normal and abnormal labour, sleep, and parenting in general. The lady who booked me in said I should’ve booked them about a month ago, but I wasn’ to know. I wonder if there’s other classes I could’ve had that I missed?A parent told me the other day that I should book into the breastfeeding one after birth as well.

We are babysitting overnight tonight. I’m still not confident enough to change the diapers though, so hubby will do that. It’s probably going to be another night of watching movies, etc. I’m planning on taking some lesson plans to do there this time though, as I may not get time tomorrow. I still hope we can go for a walk later. Last time they gave us $30 for food and $50 for babysitting for 7 hours. I’m a bit apprehensive though about sleeping on the couch, as I;ve been sleeping with my pregnancy pillow lately, so sleeping without it will be weird.

The most fun thing that we did over the break was ZOMBIE WALK!! I wanted to go for 3 yrs now, but always missed it.

I only realised it was on 2 days before the event, but it was super fun! I thought since I’m pregnant it’d be fun to go as a pregnant zombie.

We got the costumes from Savers, (and got a bag of baby clothes – mostly size 1 sleeping sacks – at the same time.)

We went a bit overboard with the makeup though, as I still have red paint on my legs and flour in my hair 😛 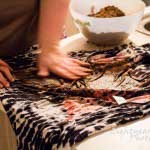 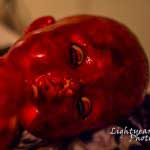 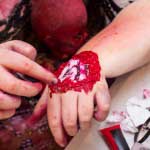 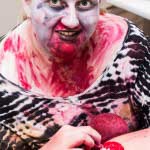 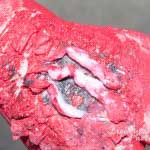 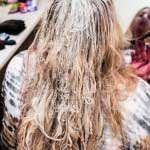 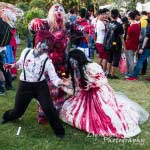 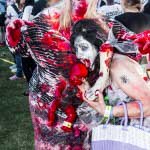 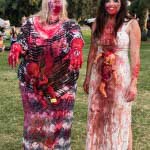 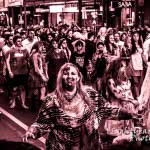 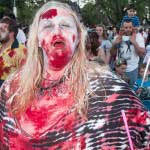 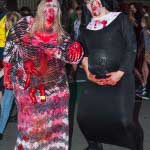