He has much better control over his limbs now, and I suspect it won’t be long before he’s at the stage where he is realizing that his limbs are his, and begins reaching for things.

Yesterday my husband said he had rolled off of the bed and into his bouncer within 1 minute! he can shuffle sideways now unintentionally, and my husband has seen him roll from back to front on occasion. He can roll from his back to his side pretty easily now.

His technique is using his legs to kick up and arch his back, then kick away from the surface he’s on. This is how he has been moving in the sleep positioner.

He is able to stay awake for MUCH longer now.

He almost always stops crying as I go to pick him up now. He only doesn’t if he’s been howling for around 20 mins or more.

He’s drinking much, much more now – Around double what his quota was at 2 weeks old. (in excess of 200ml per feed.) – still a combo of formula and breast milk.

He’s more able to command and hold his head up.

We’ve figured out that if hubby swaddles Liam at night (because he gets out of my swaddles in 5 mins) he can’t get out of his swaddle and doesn’t hit his head on the bassinet. This also keeps him content for much longer, and allows us to get better rest. This was working until Thursday night, when he got out of hubby’s swaddle and was diagonally the opposite way to before! 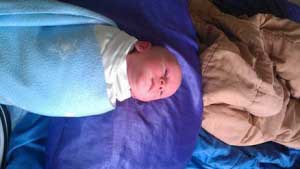 Taco Townsend all swaddled up

Introducing him to different genres of music. We played him the radio for the first time this week. (90’s hits)

His smile is almost genuine now we think.

I’m almost positive he recognizes my husband and I now.

Liam met my cousin and his wife this week.

First shopping outing  – He stayed asleep the whole time – It was a breeze!!! 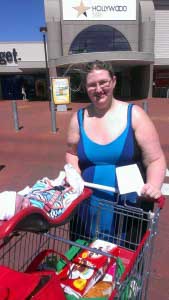 First tastes of roasted carrot and Pink Lemonade, thanks to my nutty family giving him tastes and smells of foods without my consent!!! (He’s also tasted hot salami and smelled bourbon!) Poor child!!! *Please note everything was room temp, and he didn’t actually take anything into his mouth. For reference, he seemed to like the roasted carrot. His first food taste was hot salami a few weeks ago – he cried 😐

His first projectile vomit was on Saturday, in front of my husbands client. CHARMING!

This week he tried the play gym in his ct for the first time, and he’s getting more and more used to it, and more content in there for longer.

I’ve started incorporating the signs for “milk” and “more” into his routine, and have begun singing a few different songs for various tasks.

We haven’t read much to him this week, but we’ve talked to him loads and sang him lots of songs, and made up a few short stories of our own. There has been much more physical play this week.

Hubby gave him gentle wizzies around the room and bounced him gently on his leg / arm and he seems to like that.

Cousin rocked him in the cradle position front to back like a pirate ship, and he also liked that.

Liam didn’t poo for 3-4 days when we changed his formula over, and then he did a great big one that was really stinky and resembled chocolate caramel custard or light coloured, thick gravy.

We were going to incorporate massaging after bath time into his routine schedule to get him more used to massages, but he came out with a massive red rash all over, akin to acne. We’re unsure if it’s baby acne, cradle cap, eczema, heat rash, or an aversion to some kind of product. Therefore we haven’t bathed / oiled him as routinely as we were going to this week. We hope to find out the cause and treatment at his 6 week scan on Feb 3rd. On Wednesday night we bathed him without the oil massage after, and we rinced him off, and the rash has cleared up a lot.

My first official day of work was yesterday, the 29th of Jan. I’m now working Mon, Tues, Thurs, Fri and Sat for roughly 2.5 hours a day. I’ve asked my neighbor to babysit Liam on the few days that my husband and I have work conflicts – as it would look unprofessional to have a screaming baby in my home studio!

Gained another few kilos again, probably due to increased meal sizes, and the bbq (and carrot cake) that we had on Australia day.

I managed to get 80 ml from 1 breast when I expressed on Monday night, despite the bed sheet and pillowcases being riddled with large milk puddles! 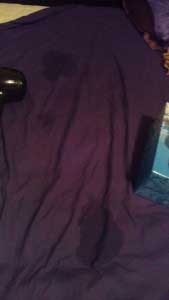 Tried hand expressing for the first time! – only got about 5-10 ml from 1 breast.

I mustered up the courage to take Liam out on his first daytrip. We went to Wynn vale dam and had a small picnic, and a drive up to Birdwood and Gumeraccah to look at the Bushfire damage. I breastfed him twice in public on this trip, and it all went really well. 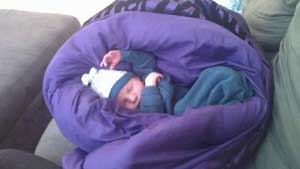