Baby’s movements have been much stronger this week, and I’ve been having much more water now that it’s hot, etc. I often feel him moving a lot at night, both on the inside and outside! It’s starting to hurt sometimes now when I lay on my back, so I avoid doing that as much as possible, although whenever I go in for checkups and ultrasounds they still want me to lie on my back!?!?!

Also, my belly button has begun to protrude more. I’ve never seen the end of it until this week! I wonder if it’ll pop out or not. 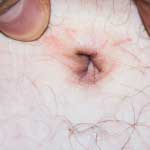 Lately I’ve been getting pins and needles often in my hands and feet. I’m also more breathless than I was before. At work I try to avoid the stairs as much as I can.

I’m needing to urinate religiously every night now, and sometimes during the day I can pee twice an hour at the most. I’m still fairly incontinent, and wear pads all the time now.

I’ve actually been eating a bit less than I was, now that the baby is storing fat, I’d much rather he keep slim and not chubby and bigger (therefore harder to push out,) so I’ve been eating 1-3 main meals a day, with a few snacks in between. The days when I’ve only had 1 main meal were unintentional, and usually not the healthiest options. I’ve really been trying to cook my own foods rather than take-aways, and add in some healthier options. I guess perhaps I’ve been mostly wanting to sleep, so I’ve spent less time actually awake, and on the days when I don’t have to get up early or teach much I’ve not actually been awake much, which may explain the lack of food consumption. I’ve lost 2 kilos this fortnight, so I now weigh about 160.2kg. I’m glad I’ve lost some weight as at my last appointment the doctor said I’d gained too much weight. She said someone my size should only gain 6 kg in total during pregnancy, and so far I’ve gained either 18 or 8 kg in total, (depending on if you count that massive 10kg spike in the first month or not.)

I’ve been loving ice cream and fruits lately, and still LOVING sweet things. Butter chicken with lentils and chickpeas has been a recent craving a few weeks ago too, though I think it caused heartburn.

The other day I spent a few hours just attending to bits of my body that have gone neglected for a while, and I did things like apply heel balm, clip my nails, apply face cream and scrub, and go over my stretch marks with the sampler cream I got in the bounty bag.

(I noticed new stretch marks down my back, under my boobs, and on my shoulders.)

My lips have been very dry lately, so I’m trying to apply balm more often.

Since moving my antenatal care to the Lyell Mcewin hospital my appointment frequency has doubled. I’m now attending every 2-3 weeks, with regular checks and things in between.

I had my second glucose tolerance test at week 30. My finger prick was 5.6 or something, which is normal. Tests came back negative for gestational diabetes. YAY. My TSH (thyroid) and vitamin D levels are also good now. I’ve been taking 1 vitamin D capsule a day, and having about 75mg of Thyroxine a day.

I had another ultrasound where the technician double checked the gender. She said she found the scrotum, so he is indeed a boy. She spent a lot of time checking the kidneys, diaphragm, etc. My placenta is nice and far away from the cervix, so that’s good, and the baby was curled up with his head down, and he was curled around my left side with his feet pointing to the right. It was interesting to notice that much more of my belly was covered with the doppler this time around.

I have another ultrasound booked in for 2 weeks time, which I’m hoping doesn’t clash with work (but I’ll have to check.) My next antenatal appointment is booked for a Friday, because the Thursday booking would have clashed with my antenatal class.

Some nurse talked me through early breastfeeding and told me that the baby will be given straight to me at the birth – chest to chest for an hour to encourage feeding before being measured and checked, etc, which is good. I’ve been told I will be able to have a private room for the birth. I asked about if I should do a birth plan and the doctor didn’t want me to. She said they are rarely looked at, and that those who make plans generally have things go wrong. she did say though that I’ll be able to talk to someone about the pain relief options for childbirth soon, as I’m very unclear on that. She kind of implied that the epidural was different to the spinal tap…

My husband has said he doesn’t want forceps or morphine / codeine to be used unless the baby is in great danger, and that he would like to be the person to guide the baby out of me. We’re pondering if he will take photos or if someone else will.

BABY (And Other) BUYS

We’ve really been trying not to buy so much for the baby, as I’m aware that the guests of the baby shower would like to provide SOMETHING. Despite this, the urge to buy has been a big one.

This fortnight I splurged and bought a secondhand 12ft pool, because I haven’t been getting much exercise, I love swimming, and the idea of feeling weightless and stretching my limbs and ligaments sounds appealing, plus it’s really hotting up so I’d rather spend december floating, rather than sweltering. The pool was $200 including filter and ladder, so not a bad deal. We also bought a cover for the pool ($20), and some chlorine ($30?).

My husband purchased a second camera ($1900 or so), clothing rack ($40), and a new photography case ($70), which he’s been wanting to do for over a year now. The new camera has better video and focusing capabilities.

I went back to the reject shop and got the car bookends, as they are way cuter, and go with the fire trucks. ($12)

I also went to Neds and got some baskets, ribbon, and 1 set of travel containers (totalling $52) for the nursery and hospital bag.

This week I packed the majority of the hospital bag – Just have hubby’s clothes to go, and we haven’t yet figured out front opening clothes for me. (I emailed my aunt about making some for me, but she hasn’t replied.) I do have an old buttoned house coat I could wear at a pinch, but the arm holes may be too small now.

My husband installed the car seat. Unfortunately due to potential traffic hazards,  it had to be installed behind the front passenger seat where I sit, and my legroom and ability to recline is now greatly compromised 🙁 I can’t even open the glove box anymore unless I get out of the car.

I took most stuff out of the nursery that shouldn’t live in there, like the pram, high chair, safety gates, car seat, and bassinets, and tried to organise where things are going to go that are staying in the nursery. It’s much more spacious and inviting now. I’ve been sitting in there a lot this week, as it’s now the cleanest and most organised room in the house 😛

We suspended a few of the brown wicker baskets from the change table with blue checkered ribbon, as I realised the drawers were a bit impractical, as I’d need to take my eyes off baby to access them during a change. I’m going to keep nappies, wipes, medicine, and lotions in those.

I’m currently using a white basket for nursing things, and considering using a second one for baby bottles and / or magazines and books. I still have 1-2 free baskets. If they don’t get utilized I’ll give the two white ones to my hubby for photography things.

We hung the mobile on the cot (minus the sheep, as we haven’t got those yet,) and we decided that it’d be nice to swap the song out of the mobile for the one I had as a baby. (We had to swap the songs as my old case is pink.) It took us a while to figure out how to swap them properly and how to make my song go faster. A bit of RP7 did the job 🙂 His mobile now plays a lovely rendition of “Brahms Lullaby”, which we much prefer – I just wish it played for longer than the few mins it goes for.

I’ve set up the bookends on top of the dresser. They currently hold the 4 gender neutral children’s books I have from my own childhood, and some books on parenting during the first year.

Next to the books are some wooden dinosaurs that my dad made in high school. Hopefully these will become heirlooms one day. We plan on staining and varnishing these, along with the sheep / farm pictures that were given to us by our neighbour. 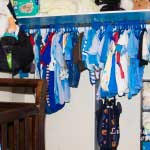 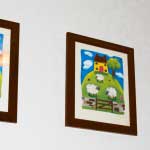 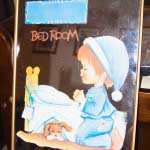 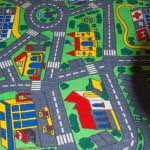 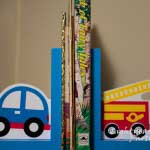 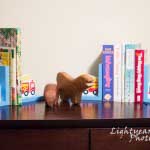 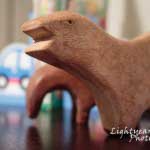 That friend who I babysat for a few times now has offered to help me plan the baby shower! She seems VERY excited. it’s nice not to have to everything myself now. She also agreed to babysit for us when we go to sydney for a few days next september for our 6 yrs of togetherness. We’re going to see Matilda the musical! I’m SUPER excited for it, as I’ve never seen a broadway musical, and we didn’t do anything special for our 5 yrs.

The other day my husband was helping the next door neighbours hook up their NBN, and he got offered a job to hook up other NBN’s. It’s a great offer, especially as i’d rather be a stay at home mum for the majority of next year, as much as I can.

After he spent quite a few hours helping, the neighbours showed us their house, and how they’re set up with 2 boys under 3. It was interesting to see their safety latches etc, as their house has the same layout as ours. I fell in love with the change table they’re using, as it converts to a bookshelf, but hubby won’t let me get it as it’s white (and our theme is dark wood,) it costs too much, and we already have a change table.

I was really inspired by the baby scrapbook and keepsakes box they showed me. I LOVE the idea of the baby firsts book being a scrapbook!

Band is focusing more on christmas parades, so I’m bowing out for a while – probably until the baby is a few months old – unless they have asy sit down jobs that they need me for 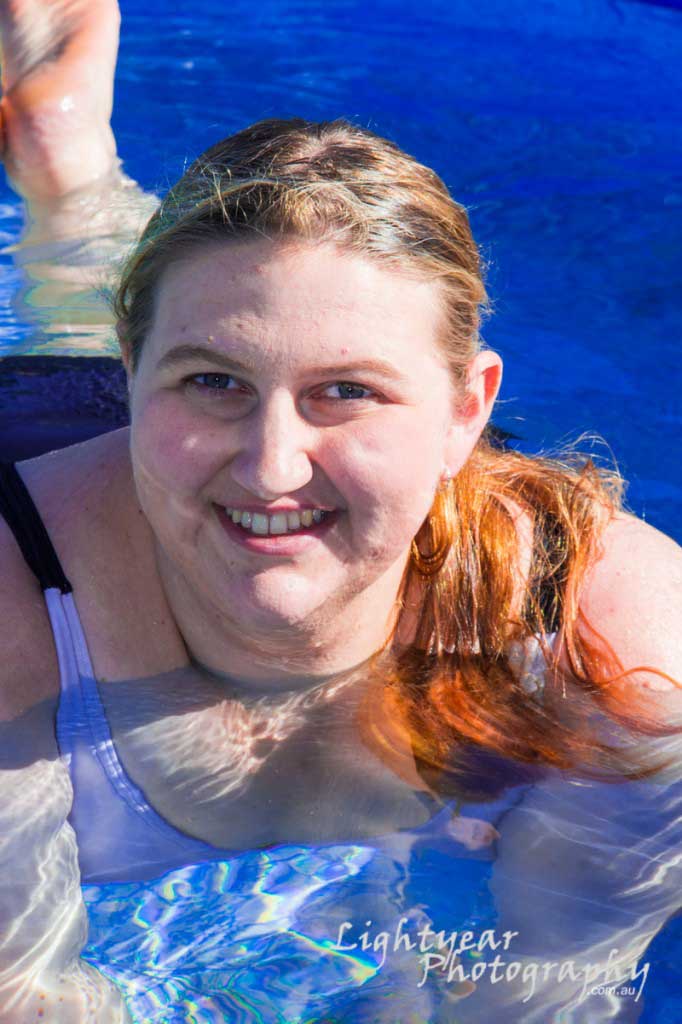