I Begun to get tired, and wanting to nap in the mid-afternoon, and I sometimes got dull fleeting pains in the left side of my groin. (Round Ligament Pain.)

A little nausea, but not much vomiting:

22nd May – had an ultrasound to check the suspected ovarian complex cyst and pregnancy was confirmed! We saw the heartbeat, and the technician thought I was 7 weeks and 4 days along. Everything looked normal. Baby was 13mm long head to rump. I was unaware that what I thought was the head was probably the yolk sac. 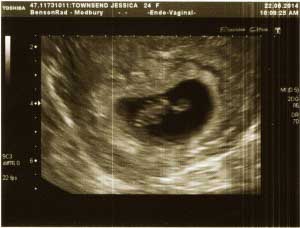 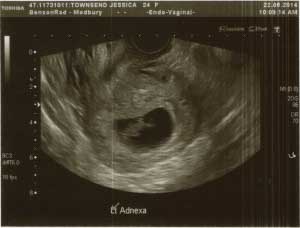 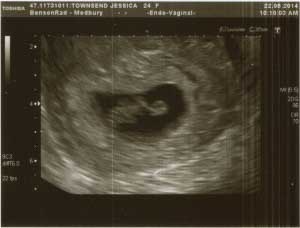 23rd May: Whilst teaching my eyesight went fuzzy and blurry for no apparent reason for 30 mins. I could only see white lines and it was hard to focus on teaching.

I told my close family that day, and my closest friends over the following few days.

25th May – Got an awful head cold. Bought a 3 wheeler stroller, baby car seat, jolly jumper, and a toy lamb.

I’m realising that I rather like the name “Leah” for a girl. my husband only seems to like “Emily,” so I thought about “Emelia” but he doesn’t like that much. He said to consider “Emilie”.

This is the week when my emotions got the best of me. I cried twice this week for no apparent reason. I found that even tiny things set me off.

This week the tiredness has definitely set in! If I don’t get to sleep by 8 or 9pm I don’t function the next day (for a 7.30am start.)

I noticed that my nipples became larger and darker.

I became even more forgetful and absent-minded than usual.

29th May: First purchase was our Sleigh Cot and matching change table.

30th May: First docs appointment relating to pregnancy: Due date given was Jan 6th. Was told I’m 8 weeks and 6 days along.

I’ve been getting heart burn.

No cravings or likes for specific foods, still a loss of appetite.

I’ve noticed that my fingernails are growing faster than before.

Only thew up 4 times by this point – mostly bile.

I have a small collection of toy lambs now.

7th June: had a few sips of apple and guava cider and felt REALLY guilty. Ate a lot of junk at a restaurant and felt nauseous, but didn’t vomit.

8th June: Got a cot Mattress.

Still have a pretty bad cold. Wanted to get medicine for it but was advised against anything. The pharmacist did give me “polaramine” but I’ve only taken it a few times, along with butter menthols.

I had my first proper fitness walk this whole pregnancy.

Appetite is slowly coming back.

Decided we needed to move to a 4 bedroom house.

Went to a baby and craft fair and bought a pregnancy pillow, cute clothes, cot sheets and bedding.

Lost some of the passion I have for my job, and wanting to put my energy and time into family, housekeeping, and baby prep.

15th June: Went to Sams Warehouse and bought a whole bunch of baby blankets, sheets, a toy dog, and a few baby bottles.

25th June: Realized I probably needed more calcium than I was having, and decided to get supplements and try to have more milk. Switched to craving sweet things after having a cherry wripe milkshake.

26th June:  had my 12 week ultrasound. I think I may have seen boy bits… Everything looked nice and normal.

Acne is getting worse now, and the spots have turned really ichy. I HATE wearing makeup now.

29th June: We compiled list of baby names we liked and disliked.

I got really bad cramps all day (but no bleeding) and I was hot and cold all day.

Saw the doctor again and the due date got moved back 3 days to the 3rd of Jan. Everything is normal. Low chance of birth defects or down syndrome. Good blood pressure. I heard the baby’s heart beat for the first time 😀 It’s much slower than in the 7 week ultrasound.

I was told that I was ineligible for a birth centre (and therefore, a water birth) because of my weight. It’s recommended I give birth in a regular hospital.

Saw family this week and they all prefer “Claire” as a middle name for a girl. my husband is still dead set on “Emily” so that’s definitely a high consideration for a girl’s name.

Got a whole bunch of cloth diapers this week.

Taking extra thyroxine on advice from the thyroid specialist, though she doesn’t think I have a diagnosed thyroid problem.

Sitting and laying positions are getting more uncomfortable, and I’m more easily irritated.

Did the wedding ring with string over belly and got lines 3 times, indicating boy prediction. I really think it’s a boy at this point. I would be glad to be wrong though. My husband really wants a girl.

My cold of 7 weeks seemed to be easing off..

Got a nipple shield, nappy bag, and some more bottles and a bottle sterilizer this week.

My nana and Auntie have begun making a baby blanket each. The wool being used is really nice, and super soft! One of our other friends is also making a blanket for us.

My mother-in-law has sent us two packages of baby things, which is lovely of her.

I’m aware that I hadn’t exercised as much as I should, and I’d been neglecting doing pelvic floor exercises, so I aimed to remedy these.

I haven’t gained any weight since that freak 10 kg gain in the early days, though my husband, (who hasn’t gained ANY weight since he was about 10, and is classed as almost underweight,) has put on 6 kg’s this week!!! Perhaps it’s sympathy weight?!? He’s gone from 59-60 kgs to 66!!