MY BODY
So I now have Sciatica on my left side! (I’ve had it pretty much this whole week.) For those of you who don’t know, Sciatica is a nasty condition in which nerves are pinched in the leg / upper thigh etc, and it’s quite common in pregnancy, due to the loosened muscles, etc.

Sadly I’ve been told it’s likely to get worse before it gets better, and I’m likely to have it for the duration of my pregnancy 😐 It hurts so much to walk that I ended up crying from the pain whilst shopping for my baby shower today. I’ve had to call in sick to work because I won’t be able to manage the stairs! There isn’t really much pain relief to be offered or anything, but I’m getting refered to see a physiotherapist.

I’ve been rather emotional today, and occasionally I have cramps or pins and needles in my legs. I get heartburn about every 2 hours, and my oedema is still there. I was checked today and told it’s unlikely that i have pre-eclampsia.

Baby’s heartbeat is 130bpm, his growth scan was good, and he is still really tall – his legs were labelled in the can as being 36 weeks along, compared to the rest of his body, around 33.5 weeks along!

Classes
This week our antenatal class was on the complications of labour. I think now we’ve decided that we don’t want forceps or pethidine to be used, and we are debating our opinions of the ventouse. I think I’ll use gas and air, and the epidural.

There’s a lady in our classes called Nat who I’ve become friendly with. She referred us to this awesome place that does 3D scans, and was at the hospital where I had my antenatal appointment today. She came out crying because she’s going to be induced in 3 weeks due to her having placenta previa. She’s not due ’till mid January (so her baby will be born before ours. Since she lives in Nuri, which is quite far and she will want to come and see the baby frequently in hospital I offered for her to stay with us if she likes, but she was whisked away by nurses before she could answer, so I guess we’ll see what she says next week.

SCANS
Yesterday I had a 3D ultrasound in this awesome place in Gawler called “My Baby’s Room”. The deal was 3 images for $50, but the lady was So nice that she didn’t even charge me and gave me 2 photos for free because the babys hand was covering his face. Unfortunately these ultrasounds aren’t recommended past 40 weeks, so theres not much point going back again this pregnancy. here’s the best of the 2 shots that she took; 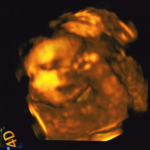 For comparison, here’s my husband and I as youngsters, (unfortunately there are no baby pics of him, so this is about the earliest pic of him); 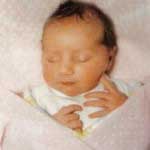 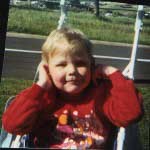 We then had a normal growth scan, and it was all fine, except the ultrasouns tech pressed VERY hard and it really hurt. The scan went for about an hour because bubs just wouldn’t stop moving, and he was on an angle so we couldn’t get a good shot of his left kidney for absolutely ages – she had to get another technician to come in and redo the scan. This lady found the kidney in next to no time, and didn’t press anywhere near as hard!

Buys
This week I’ve been mainly buying things for the baby shower tomorrow, such as food, game supplies, and decorations. I think in total we’ve most likely spent over $300 for the baby shower, as we are fully catering it this time, and are expecting 30-40 people. We have heaps of games lined up, so it should be tonnes of fun – the only problem is my darn sciatica! I’ll probably have to just sit and watch everyone having fun. It’s supposed to be nice weather, so we were going to do a few games in the pool, but I don’t know if I can get in and out without crying 🙁